“Nothing Without Women:” Elections in Central Africa 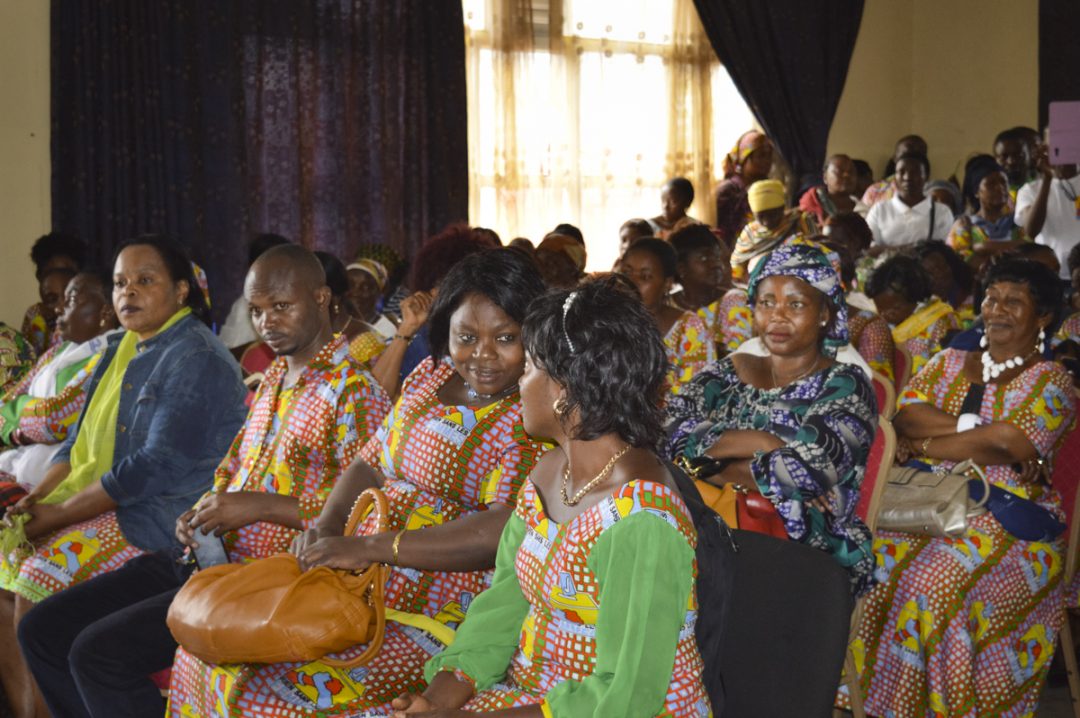 Editor’s note: You think you have challenges as a women, either running for president or voting for one? Women in the Democratic Republic of Congo (DRC), also voting this November, are banding together to demand greater government representation in a nation with just 7 women out of 47 ministers. The DRC, still recovering from 1998-2007 armed conflicts and humanitarian crisis in which more than 5 million people died, reports 80 percent of households still cannot meet basic needs. The “Nothing Without Women” group hopes to change their country’s fate.

Women in the Democratic Republic of Congo want to play a bigger role in political decision-making, and the possibility of the November elections are viewed as opportunity for change. A group of women from different political parties, known as “Nothing Without Women,” is leading the effort.

GOMA, DEMOCRATIC REPUBLIC OF CONGO — Nearly 20 Congolese women from different political parties wear matching dresses made from the same pattern of kitenge, the heavy wax cotton fabric that is popular here. They say they’re tired of being treated as observers and cheerleaders.

That’s a literal complaint. It’s a local practice for female politicians to sing and cheer when men hold meetings or make important decisions.

“I think the woman should not be there to cheer and dance for men,” says Thérèse Demba, a member of the People’s Party for Reconstruction and Democracy (PPRD). “We need to make every effort to gain access to political decision-making positions in our country.”

Elections are scheduled for later this year, but many suspect they will not be held on schedule. Still, now is the time, the women say, and together is the only way.

I think the woman should not be there to cheer and dance for men. We need to make every effort to gain access to political decision-making positions in our country.
–Thérèse Demba, a member of the People’s Party for Reconstruction and Democracy (PPRD)

The group is known in English as “Nothing Without Women.” Members have put aside political differences to engage male politicians in their political battle, and they are joined by women from a range of organizations, political parties and other groups. “I’ve come to realize that women first need to stand united because the unity of women remains a big challenge,” says Passy Mubalama, the coordinator of Action and Development Initiatives to Protect Women and Children (AIDPROFEN), a local organization.

More than 5 million people died due to armed conflicts and a humanitarian crisis in DRC between 1998 and 2007, according to widely accepted International Rescue Committee estimates.

Women are disproportionately impacted by the region’s conflict. Over a nine-month period in 2014, the United Nations Population Fund (UNFPA) recorded 11,769 cases of sexual and gender-based violence in five DRC provinces including North Kivu. Of those cases, almost 40 percent were considered directly related to the dynamics of conflict, perpetrated by armed individuals. 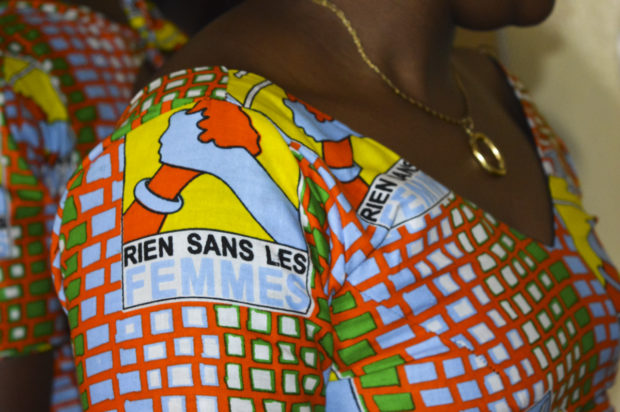 Group members wear clothes made from kitenge, a cotton fabric popular here, that displays their organization’s name and emblem.

However, women often hinder other women from being elected to public office, Mubalama says.

“Often when women see their fellow woman presenting herself to stand in elections, they make fun of her saying that she has no chance of winning. They say if fortune smiled on her and she were elected, she would look down on her fellow women,” says Mubalama.

North Kivu province’s assembly elections are scheduled for November, along with elections throughout the country. These women say that’s when they will seize the opportunity to change their role in local politics. Provincial assemblies control local government and public services including health, tourism, housing, roads, education and taxes.

Women need to know they are capable of doing many things and have a big role to play in political parties to positively influence the future of our country.
–Pascal Mugaruka, a trained leadership coach

Nothing Without Women, which formed in March 2015, submitted its memorandum to M. Dieudonné Malhere Ma-Micho, the mayor of Goma, on March 8, which was International Women’s Day. The memo reminded the mayor that DRC, and North Kivu province specifically, has a long way to go to ensure that women are equally represented in formal decision-making processes.

“I have never let you down, and from now on, I’m going to increase my support by advocating your cause to other politicians who occupy important places in our government,” Ma-Micho said when the women presented the memo.

After the March 8 meeting, the mayor pledged to add more women to his leadership team, including in positions such as the chief of avenues, who monitors the population, noting its needs and finding solutions.

Goma Mayor M. Dieudonné Malhere Ma-Micho, also wearing clothing made from the kitenge, reviews a memo presented by members of Nothing Without Women.

Extreme poverty, the poor delivery of public services and inability to maintain rule of law are all pressing issues for people in eastern DRC. The United Nations Economic Commission for Africa also cites geopolitical interests at the global and regional levels as a cause of insecurity here. Natural resource grabs are a particular cause of ongoing violence.

And 80 percent of households report an inability to meet basic needs, according to a 2012 World Bank report. Women, on average, earn about half of what men earn.

I’ve never voted for a woman and I will never do it. For me the role of women is to take care of her family and leave the politics to men.
–Candide Baraka, 42, a Goma trader who sells shoes and clothes

This inequality reaches to DRC’s highest levels. According to a gender parity analysis completed by International Alert and Observatoire de la Parité, there is just one woman in North Kivu’s provincial assembly. Just seven of 47 national ministerial posts are held by women.
A first step toward that goal is to change the world’s perception of Congolese women.

“Today, the first image that comes to people’s mind around the world on hearing the words ‘Congolese woman’ is a woman having suffered rape. And that has to change.  We want to be identified as women having brought peace to our country,” says Audette Asha, a member of the movement.

Despite their desire to be involved in public life, women remain marginalized by politicians, Asha says.

“We strongly believe that the participation of women in decision-making processes would contribute to peace and sustainable development in DRC. It is essential that women’s voices be taken into account and their participation be enhanced,” says Demba, the PPRD member.

Demba says she plans to run for a seat in North Kivu province’s assembly in November. Her goal is to fight political corruption, including embezzlement of public funds.

“I used to be a member of a party and one of our fellow members who held a high position abused his powers to embezzle funds designed to benefit vulnerable people,” she says, declining to name that political party. “As a result, a rebellious spirit started rising within me such that I decided to stand for provincial parliamentary elections to be able to work for positive changes in my country.”

The movement of women running for office is growing, Demba says.

“Men will always exploit women for their personal interest, inciting women to dance for them and accompanying them on their road to success, while women are only dancing and singing as it has always been,” he says.  –Dobson Asumani, a political scientist

“Women need to know they are capable of doing many things and have a big role to play in political parties to positively influence the future of our country,” Mugaruka says.

Dobson Asumani, a political scientist who has worked on campaigns, agrees.

Men will always exploit women for their personal interest, inciting women to dance for them and accompanying them on their road to success, while women are only dancing and singing as it has always been.

But some local people say they’re uncomfortable with the idea of women running for office.

Candide Baraka, 42, a Goma trader who sells shoes and clothes, says she would not vote for a woman because she believes men, not women, were created to engage in politics.

I’ve never voted for a woman and I will never do it,” she says. “For me the role of women is to take care of her family and leave the politics to men.”

Women don’t have the ability to deal with politics, says Aimable Kazinguvu, 50, a teacher.

“Politics is no easy task, it takes a lot of thought and courage. In any case, I cannot vote for a woman because women are lazy and more talkative while a politician must be reserved,” he says.

As the potential for a November election approaches, Nothing Without Women is working to galvanize women to support one another.

“We no longer want to be followers, but leaders,” Demba says.


← Transform Haiti’s Educational System: Is it Possible? “I Love My Mom a Lot, Because She Took Me to School” →