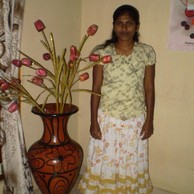 Editor’s Note: Twice-orphaned in a village destroyed by a tsunami, Chamari worked hard in high school and college—and will soon graduate with an accounting degree.

“If all kids had the chance to go to school, there would be no problems or violence in my country.” —  Chamari

The tropical island nation of Sri Lanka (“venerable island”), so lush that it used to be called Serendib (origin of serendipity), has white-sand beaches, rolling plains, and highland mountains overlooking the Bay of Bengal.  Ceylon tea and Buddhism thrive here.  This land would be idyllic, except for monsoon rains, tsunamis, and the tense aftermath of a 26-year civil war (1983-2009) that raged between the Sri Lankan military and rebel group the Tamil Tigers.  Natural disasters and political violence have taken their toll on the economy, tourism, safety, and security.

However, a small ragtag group of students in the Colombo area have striven for years to do more than make it through the next storm.  They think they can rebuild their country, ground up, in a way that never really did occur after the shattering of the 2004 Asian Tsunami.  They will begin with books.

One of the star students of a scholarship program, called the Buddhi Balika Charitable Trust (sponsored by the Skees Family Foundation through V-Day), is Chamari Thushara Dilhani.  She is 24, and she is one of the lucky ones:  She is now a student at Rajarata University, steadily moving toward her goal of earning a professional degree in accounting.

Twice orphaned, Chamari remembers her father simply walking away one day and never returning.  Later, her mother died of cancer. “I loved my mother,” she says. “I didn’t know she was suffering.” Then she lost her second set of parents, the aunt and uncle who adopted her, in the Indian Ocean tsunami.

Without the help she received for high school and college fees ($800 U.S./year), Chamari says,  “I would have been nothing more than a housemaid,” earning next to nothing serving others in the village.  But now Chamari will earn a degree in her chosen field and land a job that will place her solidly in the middle class. She will marry, have a family, buy a home, and contribute to the GDP.

She will have the freedom to believe in what she thinks.

She has come a long way, but she recognizes that many other young people deserve a shot at schooling, too.  Founders  Pam Schmoll and Vasanthi Harasgama wish to support more students, because of the impact they’ve seen:  The chance to advance changes everything.

“It’s such a small amount of money, really,” Vasanthi says. “What matters far more is that someone cares.”

Vasanthi wishes to extend scholarships to many more than the 47 girls she currently supports. “There is so much talent” among the children of the rural poor, she asserts.

“Chamari is one of the chosen few—the lucky ones—but so many get left behind.”  Personally, Vasanthi lives the peace she envisions for Sri Lanka. Herself a Hindu Tamil, she fell in love with and married a Buddhist Singhalese man, their marriage a union of the factions still fighting today. And she works daily side-by-side with her Singhalese assistant, Hiranthi Siriwardene, who “is very easy to love.”  They both work second jobs to supplement their scholarship work, and they both say they simply cannot stop.

“I don’t even want to imagine what Chamari’s life would be like without school,” Vasanthi shudders. “Right on her doorstep” are the social problems Chamari has sidestepped:  drugs, prostitution, and human trafficking.  Even if she escaped such a tragic fate, she’d still have ended up doing menial work in the village, excluded from the 21st century and the world she now clamors to see.   “I want to travel everywhere,” Chamari laughs, “maybe first—your country.”

Chamari, an only child to begin with, has lost all of her family except the cousin she now stays with when home on college holidays. She has lived nearly her entire life in a war zone.  The civil war began before she was born and, although officially over, has aftershocks that continue today. Her village, wiped out in the 2004 Tsunami, has not had electricity or plumbing before or since. She did not know what the word “relax” meant until she became a college coed, living in a house on-campus with 19 other girls, listening to music while they cook, watching television and reading books, checking out the cute guys in class and laughing, finally.

Ambition to rebuild: that is what drives Chamari to continue her studies and speak out on behalf of other kids, so that they may share such freedom of opportunity.

“If all kids had the chance to go to school,” Chamari chimes in, “I think there would be no problems or violence in my country. People would be more intelligent; they would earn more money, be safe, and have an enjoyable life.”

The chance to advance changes everything.