The Flash Point of Anger 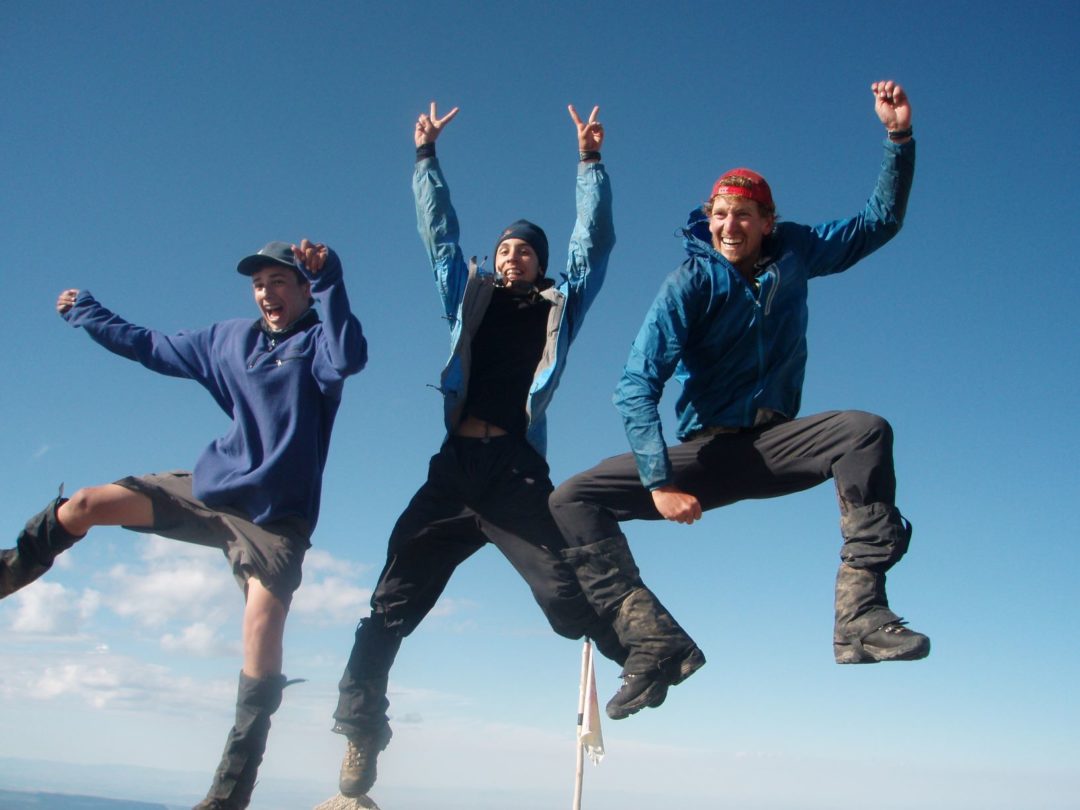 Cody and wilderness friends jumping for joy at the top of the Bighorn Mountains.

Editor’s note: Cody, a brand-new graduate of Mt. Eden High School in Hayward, California, was a typical teenager, playing video games and hanging out with his friends. He also did community service, such as tutoring. Everything changed when he was ten and his parents separated. “It caused a lot of rifts in the family,” Cody recalls. He began a downward spiral that no one even could see was happening, because he was so careful to hide his feelings. “But with the help of Summer Search, I was finally able to move on from the problems in both my family and myself,” Cody says now. Not only has he faced the rage within, he’s talked openly to an audience of several hundred people, and then dared to share his story below.

Cody begins college this fall at the University of California Santa Cruz.

Guest post by graduating high-school senior Cody, who joined Summer Search during a time of turmoil in his family and himself and soon faced, head-on, a rage he didn’t even realize was inside him. Cody tells his story in his own words, and reveals where he ended up.

By Cody for Summer Search. Cody, facing down his inner demons in the Montana mountains.

Anger, in its purest form, is rage. Unruly. Unresponsive. Uncontrollable, almost like fire. If it isn’t used for a purpose, it burns, ravages, and destroys things.

Ignoring my anger and hiding my emotions was something I was good at.

Ignoring my anger was something I was good at. Problems at home and inside myself were always on my mind, every day of every month. Every year, this was the norm for me: the same old internal suffering, with new classes and new environments. The struggles I faced never showed on my face, though, because hiding my emotions was a skill I’d picked up. I had years of experience under my belt.

What no one knew, and what I didn’t talk about, was that my brother and I could be called yinand yang. Growing up, I was the introverted, quiet kid, while he was the rambunctious, talkative kid. One thing we had in common was our anger over the problems at home. The difference, though, was in how we showed it and dealt with it. He wore everything on his sleeve, and I kept it all under tight wraps. His anger culminated in rampages: He broke down doors and walls, whatever was in his way. He moved out. Soon enough, he was on pills and landed in a group home. Both turned out to be hapless solutions, as the pills had horrible side effects and the group-home residents bullied him. Meanwhile, while all these things were happening, I did nothing, showed nothing.

Weeks passed and, lo and behold, I was accepted into the Summer Search program. But again, I played this down and said to myself, “Cool.” At the orientation, I felt awkward and mainly stuck around people I knew from my own high school. I met my mentor, Michael, and began my first year of Summer Search having to call him and talk about myself every week. I couldn’t have known then, how hard it would be for me to continue on the path of silence I’d treaded for so long.

I conquered 130 miles of terrain, gaining 21,000 feet of elevation in 30 days. It was, and still is, an incredible feeling of accomplishment. Celebrating at the end of another long day’s hike.

My first summer trip was to the Bighorn Mountains in northern Wyoming with the National Outdoor Leadership School (NOLS). It was, by far, the hardest thing I have ever done. I wasn’t exactly sure how I made it through, but I found some strength in the thought that fifty other students were doing the same thing I was; and we would all do it together. It was the first time I really felt any sort of support beyond my family and friends. And guess what? I’m standing here today, having conquered 130 miles of terrain, gaining 21,000 feet of elevation in 30 days. It was, and still is, an incredible feeling of accomplishment.

Returning to school that fall, junior year was tough—AP classes and more involvement in extracurricular commitments (such as being an ambassador for Summer Search) made for a stressful year.

The problems at home continued, and I continued to try to ignore them all. The relationship between my mom and I deteriorated even more, and I completely stopped speaking to her. Finally, in February of that year, everything came to a flashpoint. The constant pressure to perform in school, combined with the problems at home, accumulated into one giant fight. The way I was dealing with everything—by ignoring anyone who made me angry—was no longer working. I was ignoring everything, including Summer Search. In fact, I was not even on track to go on a trip that next summer, because I was so busy trying to avoid everything. I felt stuck between a rock and a hard place by not calling in to my mentor, and possibly missing out on the opportunities right in front of me, because I was scared to admit that my anger had built up to explosion and was now dangerously leaking out.

When I eventually called the Summer Search office, my mentor Michael was right there waiting. He wanted to know why I hadn’t been there for several weeks. I lied and told him some cheap excuse, like “I forgot.” While that got me out temporarily, the next time I called in, both Michael and [program director] Monica were waiting . . . . This couldn’t mean good.

The first question they asked was something along the lines of, “What’s really going on, Cody?” I lied again, citing the same excuse, but that wouldn’t work forever. They knew, and I could tell they knew. They were persistent in their interrogation, and slowly, I began to reveal what was bothering me.

Monica compared me to a knight and his armor. I had been through battle upon battle, and seemingly came out unscathed. However, the armor that protected me wasn’t growing with me: It was no longer protecting me, but pinching and limiting me. It was time to change the way I dealt with all of this.

The rage was still there, but it felt different, because I had become self-aware.

Then, something happened. I let go. I took off that armor. With my armor down, I finally let my feelings come out. I cried; I broke down. Something that I’d lacked for so long–a physical release of my emotions–came pouring out. It’s hard to describe, but I felt the weight pile on as I realized how callous I’d become; but simultaneously, I also felt it wash away with every tear I shed. The rage was still there, but it felt different, because I had become self-aware. I now wanted to handle things differently. I realized I’d become so distant from everyone else and shut myself away. I finally was honest about how I felt and took ownership for how negatively I’d reacted to my problems.

I realized I’d been mad at myself, all these years. A part of me had been blaming myself, thinking, “What did I do wrong? Did I deserve this?” It seemed surreal, seeing my world all around me dissolve in the blink of an eye, with my brother and dad leaving while I sat at home, alone in my thoughts and feelings. Getting ready for a three-mile run as part of his training for wilderness. Cody is on the far R.

Michael and Monica asked me if I wanted to stay in the program, and said that if that was true, I’d have to be more open and honest about everything. They let the call end there, and asked me to give it some thought. I had one week. I really considered quitting, because I felt so weighted down and wasn’t sure that I could change. But I was fed up with the way things were.—So I didn’t quit, but instead, I took a risk and let them in more.

That was the day everything changed. The view from the top, once he got there, was something that Cody would never forget.

My goal for my second summer trip was to be truly open with myself and others. I took that extra step we all fear and avoid. But let me tell you, it felt amazing. I created lasting relationships that summer, and I came home rejuvenated, ready to finish what I’d started. Throughout this past year—my senior year—with my new mentor, Krismin, I’ve grown into a young adult full of promise. I don’t need to dwell on the past: It’s exactly as it says, “the past.” I learned and will continue to learn from my mistakes. I’ve stopped ignoring anything unpleasant that I feel, like anger. Instead, now I express myself. I feel empowered, stronger. When I stopped ignoring others, I also could stop ignoring myself . . . . and I ended up feeling happy.

We need to talk. The problem was silence, and the solution is speaking.

Telling my story here is part of the solution to the woes of my family and myself. The problem in our house was that no one spoke. No one talked about the problems we all ignored together. Now that I’ve been down this path for a while, that pattern in my family has to change. We need to talk. Talking about myself isn’t something I’m comfortable doing, even if I have changed so much. But it needs to be done. The problem was silence, and the solution is speaking.

I want to be a better big brother to my younger brother Jamison, and to my sister Savannah. I promise, I’ll be there for them as they grow up. I want to let my dad know how much I love him, and to acknowledge that amid all the pain and uncertainty our family has faced, I could always count on him. My mom and I have had our problems, but I’m ready now to admit that I’ve been stubborn and I’ve been wrong. I want to tell her that I’m sorry.

If I could tell others just one thing, it would be: Don’t be your own worst enemy. You have untapped potential you never knew you had. I’ve sat back and seen amazing [Summer Search] students before me climbing mountains, doing community service in all corners of the world, and becoming leaders through their example. I’ve been in awe of them . . . and now, three years later, I reflect on the journey that’s brought me to this point—to high school graduation and to college. All I can say is, if I made it here, through all the adversity and struggle I faced without and within, then anyone can. Cody says, “I hope to pay the lesson forward, and help kids like me who are plagued by whatever problems they have, to move on as well.” Daring to share his story, he will.

LEARN more about the students in Silicon Valley and six other U.S. locations, here.