Kenyan Woman Transforms Herself from a Beggar into a Lender 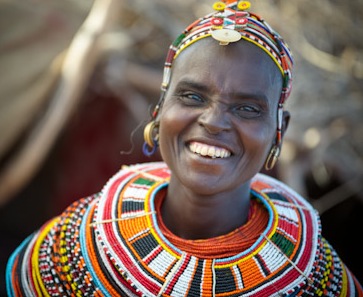 Editor’s note: We’re honored to publish this story of a courageous Kenyan woman named Malawan, who worked her way from hunger and begging into small-business ownership and school-fees sponsoring. The nonprofit that gave Malawan a chance to build a life of health and choice, The BOMA Project, was listed on the PBS documentary series Half the Sky (a film, book, and movement by Nicholas Kristof and Sheryl WuDunn) as a recommended NGO “doing great work to empower women worldwide.”

Malawan Lejalle used to beg for credit at local shops so she could feed her family. Now she and her partners own a successful business in Northern Kenya, and they’re using their savings to send 17 kids to school.

By Kathleen Colson, Founder/CEO of The BOMA Project

Ndikir, Kenya: Malawan Lejalle’s husband used to brace himself as he returned home to his village after another long trek across Northern Kenya. For centuries, pastoral nomads have lived by tending livestock on this remote and arid land. But in recent years, prolonged drought—the consequence of climate change—has killed the herds and devastated the grazing terrain. While the men travel with the livestock in search of elusive pasture, the women and children are left alone in the villages, often for months. With no money and a few goats for milk, they survive on porridge and humanitarian food aid. And sometimes, during the worst times, they don’t survive at all. 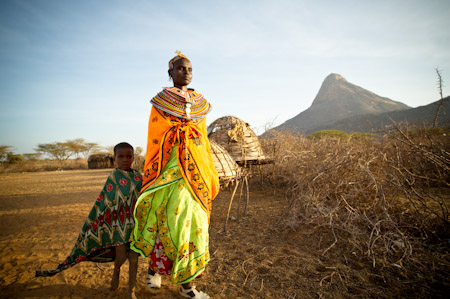 “My husband doesn’t know if he’ll find us alive when he comes home,” says Malawan, who lives with her children in a traditional stick hut in the nomadic village of Ndikir. “But the last time he returned, he found his children doing well . . . And his wife was plump!”

“The last time my husband returned, he found his children doing well—and his wife was plump!”

Malawan told me this when I was visiting Northern Kenya to meet women who are changing their lives through microenterprise. As founder and CEO of The BOMA Project, a nonprofit that helps women start small businesses in their villages, I travel several times a year across the rural Marsabit District. That year (2011), during a particularly brutal dry season—when the worst drought in 60 years triggered a hunger crisis in East Africa that impacted 13 million people and left an estimated 50,000 to 100,000 dead—I was relieved to see that Malawan and her business partners were not only surviving, but thriving. They were living with hope instead of despair.

Malawan leads a three-woman business group that sells food staples—like beans, rice, ground corn, tea, and sugar—to other families in her village. Their business strategy is simple but effective: They hire a mule, trek to the nearest large town, buy supplies at wholesale, and then haul the goods back to Ndikir, where they turn a small profit while providing their neighbors with affordable food. Through their tiny but well-stocked kiosk, they are running the village’s first “grocery store” while learning a new way to make a living that doesn’t rely on livestock.

Since launching their kiosk several years ago, Malawan and her partners have accumulated significant savings. As I reviewed their record book with BOMA operations director Kura Omar, we were astonished to see the names of 17 children who are attending secondary school. Primary school in Kenya is free, but secondary school can cost anywhere from $100 to $500 per year. The women of this BOMA business group are not only paying for six of their own children to go to secondary school, they are also paying or loaning the money for eleven other children to attend. Money from the business also allowed Malawan to undergo an important medical procedure after a miscarriage.

I love talking to Malawan because she doesn’t give me platitudes. She is passionate. I’ll never forget the first time I met her, when she said to me: “Tell me that this BOMA program will work, because I have eight children that I have to keep alive, and I’m having a hard time seeing how this program will do that.” Here’s what she says now: “You have brought life into our villages. Now we do not sleep hungry! This business gives us life.”

“This business gives us life.”

“BOMA has opened our eyes,” adds her business partner, Algoya Basele. “Now we know how to work, and we are thankful.” 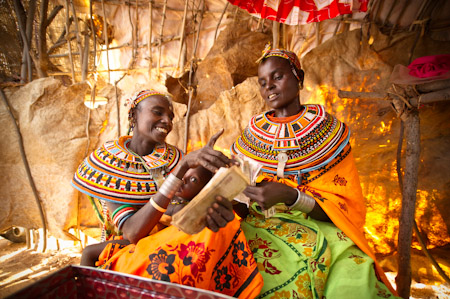 This holiday season, we at BOMA are celebrating having launched 1,145 small businesses across a region the size of New England, changing the lives of 3,963 adults who can now pay for food, school fees and medical care for 19,815 children.

Our program (the Rural Entrepreneur Access Project or REAP) targets the poorest and most vulnerable women in each community—the “ultra poor,” most of whom live on less than $1.25 per day—and helps them to graduate from poverty by providing a start-up grant, sustained business-skills and savings training, and hands-on support by local BOMA Village Mentors. Once the businesses are up and running, we also help the women to form savings associations that allow them to plan for future expenses, handle emergencies, and offer interest-bearing loans. Women like Malawan, who used to plead for credit, sell firewood, haul water and wait in line for food aid, are now respected business owners. They were beggars; now they are lenders.

97% of BOMA businesses are still in operation after 3 years.

Does the program work? Yes. Ninety-seven percent of BOMA businesses are still in operation—generating profits and accumulating savings—after three years. That’s a powerful statistic. And although we have plenty of powerful impact stats, we also love the anecdotal observation of Mohamud Arvele. He’s the chief of Kargi, a village especially hard-hit by last year’s drought. “Before BOMA, the women would come to me and ask for help and food,” he says. “But now they are working hard and even traveling to Marsabit to buy goods that can be sold in our village. These BOMA business people, they look shiny.” Shiny is good.

Reading more of Kathleen Colson’s blog will put you right there on the ground in Kenya; click here. You also can read a recent op-ed she penned for the Columbia, SC Star; click here.

LEARN how The BOMA Project differs from conventional microfinance organizations and why their entrepreneurs succeed over time, here.

SHARE this story with your networks; see menu at top of page..

DONATE to give more working moms like Malawan a chance at a job, here.