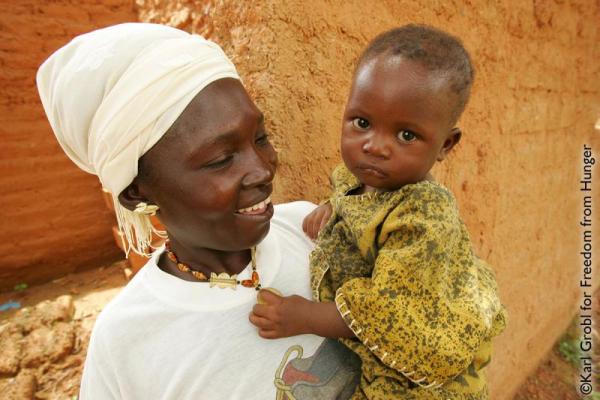 The resilience diaries: Our long-term partner, Freedom from Hunger, uses journaling to understand the role of financial products in resiliency, hunger, and wellbeing of rural households in Burkina Faso, West Africa.

By Megan Gash and Bobbi Gray for CGAP.

Marie, a 35-year old first wife of a polygamous family who lives in the Passoré province of Burkina Faso, has an intimate understanding of “resilience” because she lives it every day. She never went to school and she has 5 children. Her household sells different condiments, raises small livestock, grows peanuts, cowpea and sesame. Selling condiments and livestock allows her family to have an income during the lean season when her other activities are not profitable.

During a period of seven months, Marie’s family faced the emotional and financial strain of three funerals. While she’s thankful they were able to use their savings to cover the financial costs, these events have limited her ability to invest in her activities; she wishes she could gain access to larger amounts of credit to invest in them.

Marie is one of 46 women from rural households in north-central Burkina Faso who’ve participated in Freedom from Hunger’s “resilience diaries,” a seven-month project that seeks to understand how households bounce back after times of crisis.

In the framework of the Clients at the Center Financial Inclusion Research Fund, Freedom from Hunger is using diaries of participants to gauge how formal and informal financial products affect households’ resilience. The women participating in the resilience diaries are members of village banks with le Reseau des Caisses Populaires du Burkina Faso (RCPB), or members of savings groups with the Office de Développement des Eglises Evangéliques (ODE).

Marie’s story highlights many of the key findings from the studied households:

1. The most common shocks encountered in order of prevalence for households studied were illness and injury, loss of livestock, death of family members and poor harvest, all affecting both income-generation as well as food supplies.

During the seven months of the resilience diaries, Marie faced the emotional and financial strain of three funerals. Twice she found it difficult to cover education fees for her children. Her household lost three of its oxen which was a huge and significant financial and agricultural labor loss.

Study participants faced these regular shocks in addition to semi-regular shocks, such as droughts and famine every two to four years, a political crisis, and health threats such as Ebola from bordering countries.

2. The most common coping mechanisms used to respond to shocks were savings, reducing food consumption, selling grain and small livestock, purchasing on credit and lastly, borrowing from a savings group.

Marie was typically able to save and use her savings to cope with the shocks encountered by her household. She saved at least $4 every three weeks to as much as $60 depending on the success of her income activities. While she primarily used her savings to deal with shocks, she also sold her chickens, reduced their food consumption, purchased goods on credit, and relied on remittances from her brother living in the Ivory Coast.

Savings ranked as the top coping mechanism for all the resilience diaries participants. Other common coping mechanisms were not always available. For example, grain was only sold when it was available after harvest. Borrowing from financial institutions, as well as from family and friends, was less preferred and was not always possible. Ironically, when asked how they would design a financial product that would help them manage shocks, the most common answer was credit. Quick and easy access to money are key features in deciding how to cope.

3. Women play a significant role in the household economy, but are limited by gender norms, time and resources to pursue more profitable income generating activities.

Marie believes women’s empowerment means, “being able to establish one’s development plan without coercion.” She does not consider herself an empowered woman because she is forced to support certain household expenses. She also shared that she was often afraid of her husband during the past several weeks and is required to ask her husband for permission to leave the household.

Almost three-quarters of participants reported that being a woman negatively influenced their ability to generate income, mostly because they must prioritize family needs. Women cannot own land despite agriculture being a primary income generating activity. While women decide how to cope with health and food shocks, men are the ultimate decision-makers for all aspects of daily life. Most women reported not being able to leave home without permission and over half mentioned being afraid of their husbands at least once in the prior year.

4. Food insecurity dominates all of the participating households’ lives.

While Marie considers her household resilient because of its choice and use of various economic activities, her family has gone hungry. They typically have enough to eat, but she knows the quality of the food is poor, as they often rely on wild leaves to supplement their diet.

The Hunger Months: Families Getting 0 to 33 Percent of Food They Need

From August through February, the rate of participants who ranked as food secure (those who have access to food, have food available, and whose bodies can utilize the nutrients of food eaten) hit a low of 0% and a high of 33% during the course of the seven months – the latter being at the most plentiful time of the year. About 50% of participants said they have gone hungry to make a loan payment or a savings group contribution. When shocks occur, many households use negative coping mechanisms that increase food insecurity, such as reducing daily food consumption and selling grain stocks, which solve an immediate problem but can have long-term consequences.

Financial service providers (FSPs) aiming to improve household resilience in very poor and food insecure countries have to be intentional with their approach to improving household resilience. Negative coping mechanisms that can have long term developmental consequences as well as gender norms should be taken into account. Some design features that incorporate both include:

The easier and more beneficial a product or service is to the reality of their lives, the greater the likelihood the product will succeed.

Does “resilience” fit neatly with “financial inclusion” goals for FSPs? Or, does building resilience through financial services and products require a completely different mindset and approach? Judging from the resilience diaries, evidence suggests that in the short-run, achieving resilience in households requires specialized action.

LEARN more about Freedom from Hunger’s approach to ending poverty and injustice through access to education, healthcare, and enterprise here.