Editor’s Note: The Chronicle of Philanthropy, citing the just-released 2012 Millennial Impact Report, reveals 20-35-year-olds’ propensity to volunteering, fundraising, and giving—particularly for organizations with whom they have an established relationship.

Book Worm Angels, a small Chicago nonprofit, has three board members under age 30, all recruited through Northwestern University’s Kellogg School of Management.

Charities rarely make deliberate efforts to solicit young adults because they think people in their 20s and early 30s are unlikely to give.

But a new survey of more than 6,500 people ages 20 to 35 shows they are inclined to give—and are more than willing to ask their friends and relatives to do the same—when they feel passionately about a cause.

About 75 percent of young people who provided data for the 2012 Millennial Impact Report said they gave money to a nonprofit in 2011, while 70 percent said they have helped solicit donations by encouraging colleagues and others to support a cause.

But the report also found that charities wanting to connect with young donors should not expect to raise big sums. Of young adults who gave money to charities in 2011, 58 percent reported that their largest contribution was $100 or less. Only 16 percent gave $500 or more to one organization.

The survey was conducted by Achieve and Johnson, Grossnickle, and Associates, two groups that consult with charities on fundraising.

“What we heard over and over again is that millennials are eager to give if they’re already engaged in a conversation with the charity,” says Derrick Feldmann, chief executive of Achieve.

Increasingly, these relationships are developing online—and many young donors want to make their gifts electronically.

About 70 percent of young donors reported that they had made a gift online in 2011, and 7 percent said they had given via text message or through a mobile site.

But the report found that young donors are also likely to respond to more traditional appeals: About 39 percent of those who made a gift reported that they had responded to an in-person request, and 34 percent said they had made a gift through the mail.

Young donors, in fact, share the same motivations as older people. Mr. Feldmann said many young donors who support a charity do so because they have developed a relationship with the organization.

About 63 percent of those surveyed reported that they volunteered for a nonprofit last year, while 90 percent said they expect to volunteer this year. The report found that young adults who volunteer were far more likely to make a donation.

“What we found is that there is a continuum of involvement that starts with communicating, then moves on to volunteering and leadership roles,” says Angela White, chief executive of Johnson, Grossnickle and Associates.

She notes that in three focus groups conducted by researchers, participants sent a clear message about the sorts of leadership opportunities they’re searching for.

“They want real responsibilities and an opportunity to put their skills and expertise to work,” Ms. White says. “They don’t want to sit at the kiddie table.”

Groups that offer those kinds of opportunities are more likely to forge the type of relationships that lead to donations, the report found.

Book Worm Angels, a small Chicago nonprofit that encourages elementary and middle-school students to read for fun, is one of eight organizations that the report highlights for successfully recruiting young donors. The group has three board members under age 30, all recruited through Northwestern University’s Kellogg School of Management.

“They’re not burdened with ‘we already tried that’ or ‘it didn’t work at XYZ agency,’” Mr. Ban says. He notes that the young board members have also proved more than willing to encourage their friends to give money to the group. “When it comes to appealing to young donors, the lesson is it takes one to know one,” he says.

How Much Young Donors Give

The share of donors ages 20 to 35 who gave the following sums as their largest charitable donation in 2011. 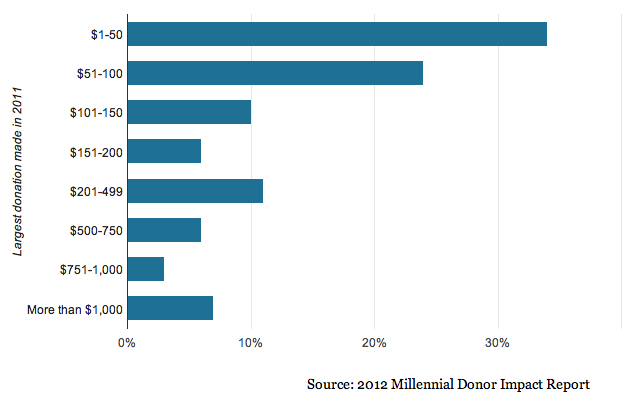 
← Happy Graduation to Our Family and the World Changing the World One Mind, One Song at a Time →