Turning Philanthropy on Its Head in Haiti 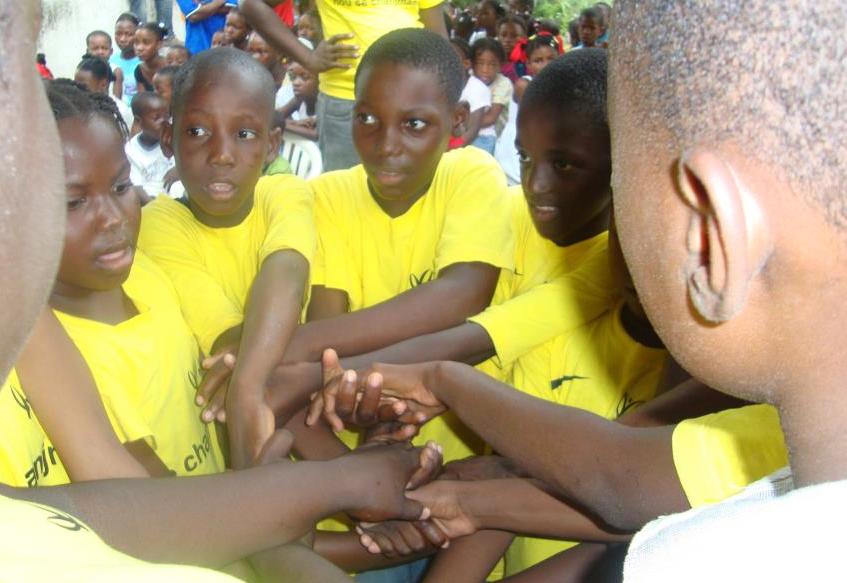 Every citizen of and ex-pat from Haiti has a story: where they were on the day of the January 2010 earthquake. Many Americans also recall how the horror of that day brought Haiti into the forefront of the world’s attention. . . briefly. Guest post by Karen Ansara, whose family launched a fund to support grassroots rebuilding by Haitians, for Haitians, long after the disaster.

Editor’s note: Our family has a strong passion for social justice, but passion alone gets us nowhere: We must take action that’s carefully tailored to each unique setting. This summer, I jumped at the chance to travel to Haiti and learn from a Haitian-American team about the issues facing this small Caribbean nation, before and after the 2010 earthquake. I found a country whose heart beats strong, long after oppression by colonialists and slavery ended in the 1805 revolution that launched the world’s first black nation; a place whose spirit rises above the rubble after decades of deforestation, poverty, corruption, and natural disasters. To my surprise, I found a tiny nation as patriotic as my own, built—and rebuilt—by pioneers who know exactly what they want to create on their own soil. Visiting fifteen advocacy, human rights, education, agricultural, and livelihood nonprofits and social enterprises, our group saw what can happen when an outsider like Karen comes in, dares to listen, and then lets someone else take the lead.

By Karen Ansara of The Haiti Fund.

Haiti is a place where you can fall “upside down” in love with the Haitian people and culture. It is also the place where everything you knew before—including about philanthropy and development—can get turned on its head. In fact, Haitians have a phrase for that: “Tet Anba,” literally “head below,” or “upside down head.”

Over the last five years, my husband Jim and I have developed “upside down heads and hearts” for Haiti. Before the earthquake struck, we knew very, very little about this country, except for what we had read in the life-changing book, Mountains Beyond Mountains, about the founding of Partners in Health in Haiti. We made one small grant after four storms ravaged Haiti in 2008. Then, in 2009, Jim was presented with the extraordinary privilege to travel to Haiti and meet Dr. Paul Farmer—the protagonist of Mountains Beyond Mountains.

Jim was invited to consider how to create more jobs for Haitians. One visit led to three and by the end of that year Jim had been given a new job himself! He volunteered to oversee the construction of a new 100-bed community hospital in the middle of rice paddies in rural Haiti. It was a path he never could have imagined. A retired general contractor, Jim had never built anything in the developing world! Haiti would turn all Jim knew about construction upside down, “Tet Anba.” 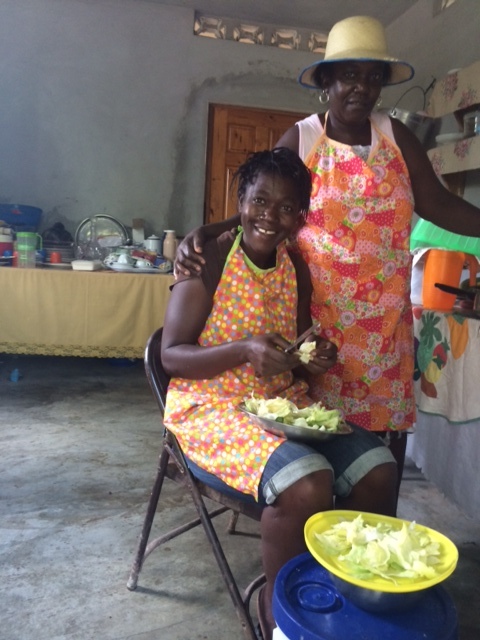 Forty hours after the earthquake, on a sleep-deprived impulse—and after just briefly visiting and working in Haiti—we launched The Haiti Fund in partnership with the Boston Foundation, where we already had a donor advised fund. We had seen on the news the intense suffering not only on the island, but also in Boston, which has the third largest Haitian community in the U.S.

Just a few months later, on January 12, 2010, Jim and David Walton from Partners in Health were in Boston reviewing blueprints for the hospital. Four days later, they were in Haiti clambering to save lives in hospital tents, where Jim remained for most of the next two months. His whole life, as well as our family’s life, went completely “Tet Anba.”

The Haiti Fund turned the Boston Foundation completely “Tet Anba.” It had never had an international initiative before. Every employee was engaged at full-tilt to raise funds to match a million dollar challenge grant in a month.

When we launched the Haiti Fund we had only this simple framework:

The only problem was: I didn’t know a single Haitian in the Boston area. I didn’t know that Haiti was the first free black nation. I didn’t know most Haitians spoke Creole. I did know that Haiti had suffered under brutal dictators, had had a leftist Priest-President, and I had suspected that the US had meddled in Haiti to protect its business interests. Beyond that, I had everything to learn about Haiti.

To compensate for my ignorance, I thought I knew a few things about international philanthropy—but Haiti turned those things “Tet Anba,” too.

After more than a decade of making international grants, plus completing a course on strategic philanthropy two years earlier, I knew how to identify a problem and develop a theory of change to solve it. I knew how to review a proposal and deploy money to make things happen. But I sure didn’t know much about how to choose in an instant the best organizations to save lives during a disaster or how to change centuries of deep-rooted oppression in Haiti.

The lessons I have learned from my wise Haitian American colleagues, passionate Haiti activists, and funders have turned my preconceived notions about international philanthropy “Tet Anba.” I will share with you just three of many lessons.

1. Focus on partners, not plans.

In “strategic philanthropy,” we (generally outsiders) articulate a problem as we see it. We create an “if-then” equation to solve it: “If we target money here, change will happen there.” We find “thought leaders” and practitioners with solutions on our pre-charted path and we fund them. If we meet our shared goals, we all feel really good about ourselves. 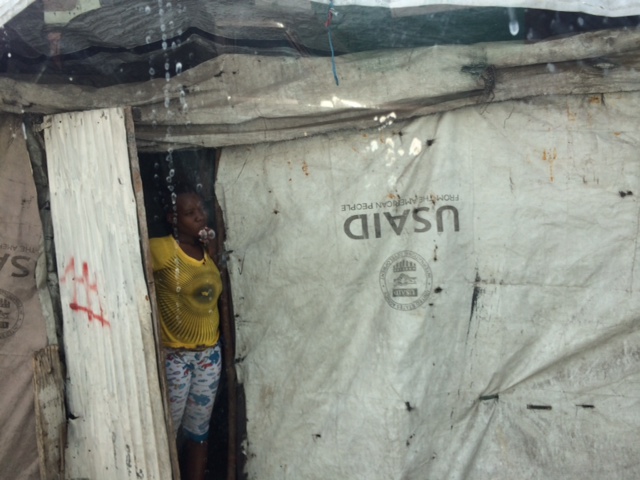 For several weeks after the earthquake we held public events were attended by hundreds of Haitains. They kept saying that no one was asking them for their help or their opinions – even though Haiti was their homeland and they often supported family there. So we decided we would ask Haitians in Boston to lead… And that’s when the learning really started.

The bottom line: we didn’t start with a plan for Haiti’s reconstruction. We didn’t start with certain NGOs, sectors, or geographies. We just created a space for Haitians to examine their own realities and work together to set their own collective agenda. This was revolutionary for a people for whom sovereignty and independent decision-making has always been so elusive. Simply being heard in Haiti, can be a “Tet Anba” experience.

2. Focus on empowerment, not impact.

The second “Tet Anba” lesson is closely related to the first: so much of the discourse in philanthropy today is about how to ensure the broadest and most measurable impact with our limited dollars. I find “impact” to be an aggressive term. It is about what “we” do to “someone or something” else. It is about the size of the indelible crater we leave after we funders have moved on.

After my Haiti Fund years, I care far less about measurable impact and much more about signs of empowerment. Have our grants helped Haitians find their own voices? Have we enabled and ennobled grassroots leaders—too long dismissed by elites, politicians and foreign interests—to articulate their own visions and celebrate their own collective assets? Have we held these leaders and their organizations to the highest standards of ethics, professionalism, and practice—and given them the tools, training and trust needed to achieve their greatest aspirations for themselves and their communities?

At the Haiti Fund we could probably tell you about the number of irrigation trenches dug, grain mills built, or formerly unschooled children enrolled with our funds. But that’s not the real impact we’ve made. The real impact of this kind of philanthropy is evidenced by whether we have left Haitian organizations prouder and more powerful to work things out together—to improve their communities and society—over the very, very long haul, long after we funders have gone home and stopped measuring.

3. Focus on depth, not breadth.

Because poverty is undeniably multi-layered, I have learned to peel off the layers of the onion in a local context instead of trying to go quickly to scale. It’s not just about lack of income, lack of infrastructure, lack of education, lack of health care, or lack of any particular resource. Poverty may also be perpetuated by entrenched social norms, by structural and internalized oppression, by lack of a political voice or right to hold one’s government accountable. I have seen that all of these layers must be addressed for an individual or a community to move forward. Our goal is not the number of lives touched or specific behaviors changed, but the number of communities transformed—and that requires digging deep into the spiritual, intellectual, social, economic, and physical ecosystems which shape individuals.

When we first established the Haiti Fund I envisioned rebuilding broken urban infrastructure, like schools and hospitals, homes and roads. Based on the deep wisdom of our Advisory Council and incomparable staff, we chose instead to repair a crippled agrarian economy, help Haitian farmers organize to feed themselves and their country, block competitive, cheap foreign food imports, and to hold USAID accountable. We chose to help the most oppressed Haitian children – 200,000 indentured servants – go to fast track primary schools to have a shot at dignity and independent futures. We chose to train teachers to view teaching as a profession rather than just food on the table. We chose to support painstakingly long dialogues, neighborhood by neighborhood, to change social norms against child abuse, domestic violence and corporal punishment in schools. We chose to invest in rebuilding social trust among people who for centuries have been pitted against each other. 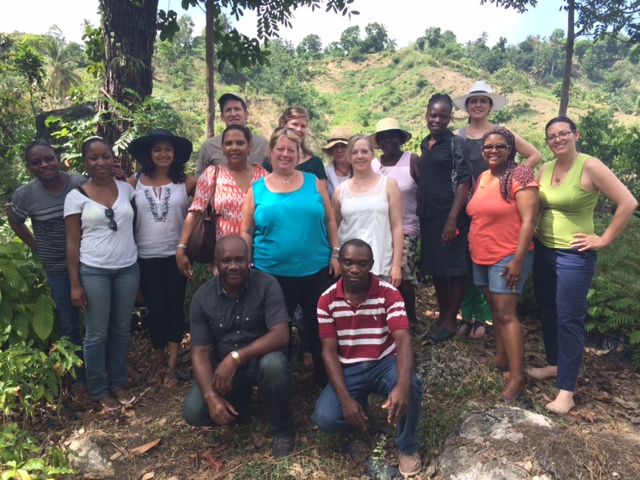 Many times we have chosen to fund one-off projects and small enterprises, rather than systemic solutions, because Haiti at this time is so fractured. It has a national curriculum, but not a national education system. It has a national teaching hospital, but not an integrated national health care system. It has a national Parliament, but no municipal elections. So, while it would in some ways be ideal to propel change on a large scale, that is not so realistic in Haiti. In the absence of ample opportunities for large-scale systems change, I have learned that changing realities for one child, one family, one school, one commune, or one group of 100 women, is deeply gratifying. Each time we do so, we announce that a new Haiti is possible, if we practice “Tet Anba Philanthropy.”

When you turn the power dynamics in philanthropy upside down, when your “head is underneath,” you can see the day-to-day needs and dreams of grassroots Haitians all the more clearly.

The Haiti Fund had one mission: To help Haitians rebuild their own country after the January, 2010 earthquake. Having raised and disbursed $2.1 million in grants to the grassroots nonprofits and community-based organizations, The Haiti Fund plans to close on the fifth anniversary, in hope that others will carry the torch for the country their founders, staff, and residents so dearly love. For more information, visit the Boston Foundation website or call 617-338-1700.