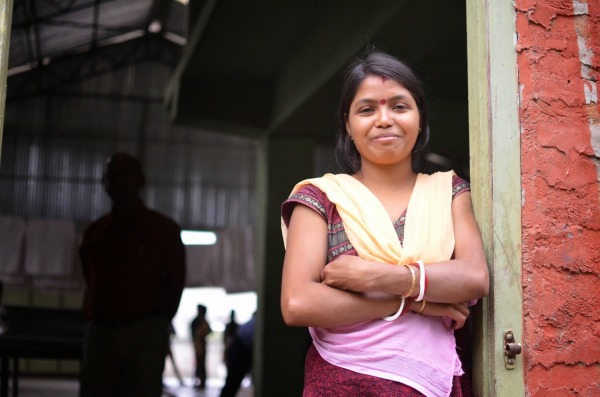 Editor’s note: Earlier this year, Director Suzanne visited the field with our Catalyst-grantee partner, Upaya Social Ventures. She gathered stories and saw firsthand the wonderful work they’re doing on the ground in India. As part of our foundation’s commitment to provide storytelling support to our partners, Suzanne has written several Face-to-Face profiles highlighting the amazing individuals that are changing their own lives and the future of their communities.

Pulled Out of School by Her Family at Age 12, Rekha Gets a Good Job at a Paper Factory

Mirze Town, Assam, India: 20-year-old Rekha was pulled out of school at age 12 to help her father with his chair-caning business. She worked for the family for six years until she was given into an arranged marriage at 18. “I loved school,” she recalls. “My favorite subjects were advanced Assamese [the local language] and Hindi.” She knows a bit of English and loves to read, especially mysteries, but now, she sighs,”We don’t have any books at home.”

Rekha’s given up on reading and any notion of going back to school. She faces intense pressure from her husband and in-laws to provide a baby. Two years into her marriage, she feels that she’s failed them.

Coming to work at a small paper-production factory gives her eight hours of reprieve. Rekha runs the machines and slices banana-tree fiber at Elrhino factory. The factory is owned by a small enterprise run by Mahesh and Nisha Bora, a father and daughter with a social mission to lift locals out of poverty by producing eco-friendly stationery and household goods.

Fifteen employees work the machines in concert; sterilizing the inputs, pressing pulp into large sheets of paper, and etching tea leaves into designs. Rekha spends the afternoon sitting in the shade just outside the side door of the warehouse, deftly peeling strips from a banana-tree trunk that will give fiber to Elrhino’s concoction of rhino and elephant dung, recycled paper, cotton fabric scraps, and dried water-hyacinth stalks. Later, she sits cross-legged on the clean mud-plaster floor, in a circle with two other young women. The first girl counts twenty cut pages for each journal, then passes the pile to Rekha, who stitch-binds it along the left side. The third girl adds a cardboard cover and glues on a colored-paper finish.

“I learned [this work] by watching,” she says. “The calendaring machine is my favorite.” Rekha worked at Elrhino for several months before dropping out due to pregnancy. Three months later she returned, somber, having miscarried. “It was very hard,” she shakes her head, earrings dangling. Her thick, long hair is pulled back. She wraps her mustard-colored scarf a little tighter around her magenta salwar kameez. At first she says she wants a baby. Then she hesitates. “It will be nice if I have children, but if I have them too early I wouldn’t be able to work. It’s really my husband and in-laws who are the ones who want me to have a child.”

Rekha Now Has Goals for Her Future

Making 3,500 rupees a month ($58), Rekha also feels she’s learning a lot about paper production and design. “I would like to run the calendering machine and learn to operate the beater machine. Also, to learn to design like our master craftsman.” She says what she’s learning on the job gets her thinking about how to design better cane-weaving products for her father’s business, too.

Yet Rekha does not see one rupee of her earnings. Like many women in northeast India, Rekha hands over her salary to her husband, who spends it paying down the credit they collect at the corner food shop and on their rented house. “I wish I could set aside a bit for savings,” Rekha says, “in case I become ill or if I encounter difficult times. I want to be prepared.”

She’d Rather Come to Work Than Stay at Home

But she still feels lucky. It’s rare for women in this local culture even to be able to work outside the home after marriage. Many women run home-based livelihoods such as weaving and livestock care. Rekha’s husband works just around the corner in a cotton-production factory, where “he does the same exact thing every day.”

“Elrhino is much better,” she notes, “because there is a lot of scope to learn. If I learn skills here, then I can use those skills at home.” Her husband wants to come work with her at Elrhino to keep an eye on her and ensure she does not even look at another man. Rekha struggles with herself about this because she wants him to be happy. 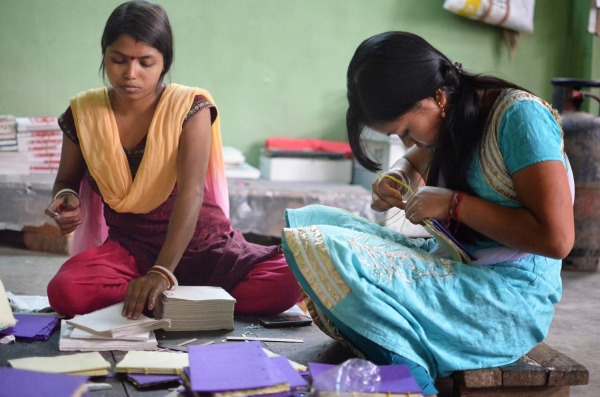 “We used to be happy. Now, if we don’t have enough money we fight. So if I work here, at least there is peace in the house.”

She wishes things could be different. “If I could have my way, we would have a lot more progress in my family. For example, I’d like to have a small shop that I run myself, but I don’t have the money to invest in that.” If only they had more money, “We would have no problems at home. Maybe we could even build a little house.”

So each morning Rekha comes to work, and in the evenings she watches soap operas on TV. “My favorite actor is a Hindi girl,” she beams. “She is a very good dancer.” Turns out, Rekha does a little singing and dancing too, in the traditional Assamese style that’s quite popular here. “I love to sing,” she confesses. “When I’m working, I love to sing. I don’t sing at home.” 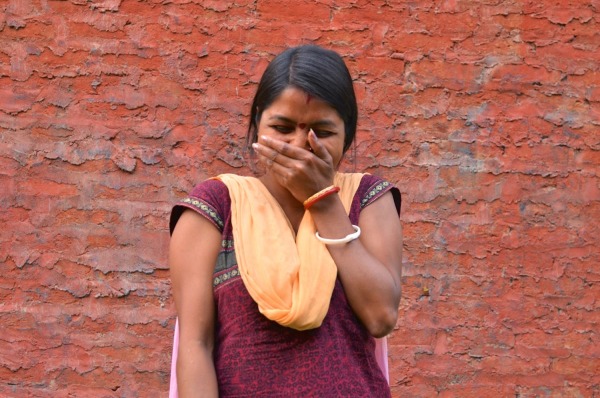 Rekha giggles as her co-workers coax her into singing for the members of the Upaya team (not pictured).

Rekha gazes across the road to a cement factory on the other side of the road. Her chin tilts up slightly. “I love working here, but what I’d really like is to be in Guwahati [the nearest big city] and be a movie star.”

Now that she has let herself talk, out of earshot of the other employees, Rekha lights up, her thin arms waving to the image in her mind of a glamorous life. Here at the factory she feels like she can be herself, laughing and singing with the other girls, creating elegant products that she’s proud to know are selling in stores in faraway places like Guwahati, Delhi, and Paris. But much of the time, Rekha is somewhere else beside here, dreaming of a life she’s only glimpsed onscreen.

“I want to be someone big, to be in a movie, to dance. It would be so nice. They look so happy in the movies. I want to be like that.”

Update on Rekha from Her Employer, Just Months Later

The Upaya team received the following update on Rekha from Elrhino CEO Nisha Bora after this story was first posted.

“Rekha is pregnant again and believes that now, perhaps, her in-laws and husband will embrace her. She wants a daughter but the rest of the family wants a son. She has chosen to opt out of work temporarily because she is afraid that coming to work might jeopardize the baby’s life.

Rekha has moved into the factory premises with her husband, into the single worker’s cottage. Her husband has replaced her on the factory floor. Rekha is bored and overcome with anxiety as she sits around waiting for her womb to do its job. She hobnobs with her ex-colleagues over lunch and tea breaks.

I have encouraged her to keep busy by taking whatever crafts work she can or wants to, at the pace she is most comfortable with and can do out of her cottage instead of having to be at the factory. She is craving some productive work and has expressed delight at the offer.”


← Finding Oneself through the Power of Storytelling: Resonate Workshops Announcing Our New Book Project! MY JOB: Real People at Work Around the World →