Will Work for Peace 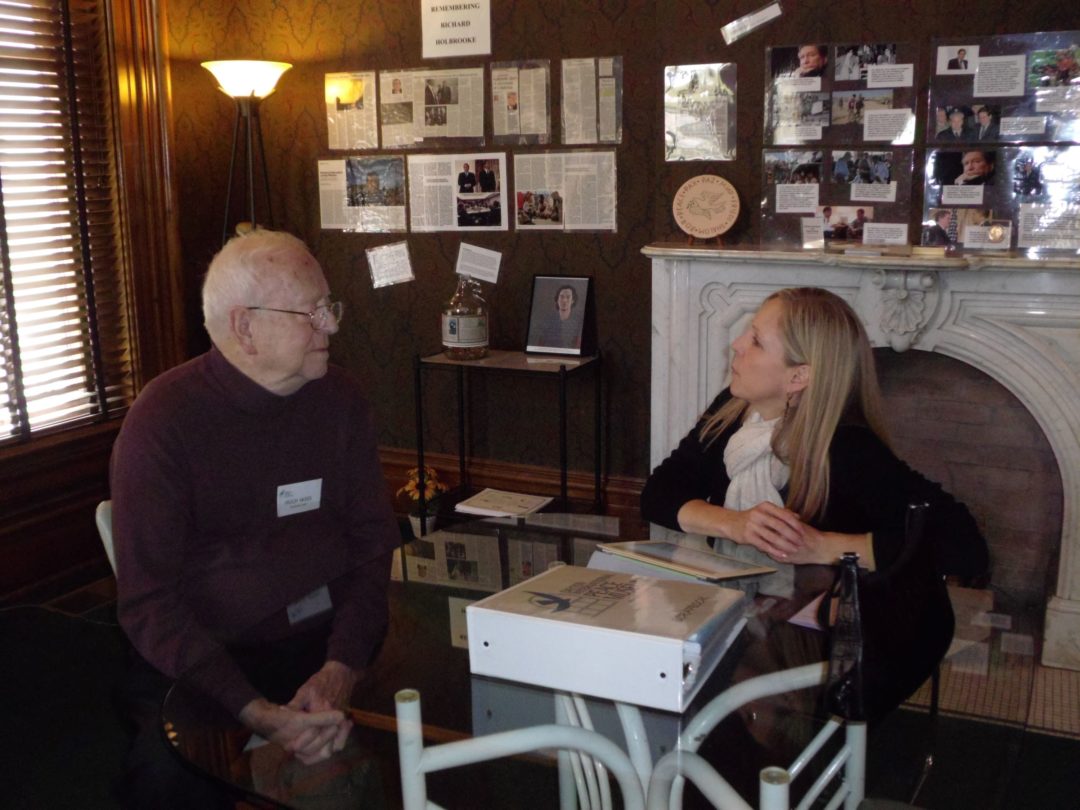 Putting his time and money where his mouth is, Hugh Skees has spent years working for what we all wish this holiday season: Peace on Earth.

He has the perspective of having lived 84 years and taken himself from a small farm in Elizabethtown, Kentucky, to around the world. Our first-generation giver, Hugh Benedict Skees, left the farm at 18 to hitch-hike to Florida, to stay with an aunt and uncle and earn money for college. He worked his way through college and a MSCE at St. Louis University, and served in the Armed Forces in Germany, all before turning thirty. He’s toured some of Europe, climbed up the inside of the Egyptian Great Pyramid, and spent nearly all of his adult life in Dayton, Ohio. An avid news junkie, Hugh always came to the family dinner table with topics of war and peace, politics and human rights. And now in his retirement years, what gets his attention more than any other social issue is what we all talk about in the winter season of hope:

However, Hugh does more than hope. He works all day every Saturday at the only museum in America dedicated to peace: the Dayton International Peace Museum (DIPM).* He’s been a volunteer since its inception in 2004, and the DIPM has become a home away from home for Hugh. He built a screen door for the 9’ tall front door of the 3-story, mid-19th-century Italianate mansion in which the museum is housed. He’s built bookshelves and served on committees, but mostly, he just shows up.

“The world needs peace, now,” Hugh insists. “We forget sometimes, because we have peace here in Ohio. But many places do not. There are those who resort to violence to try to secure an advantage. Common people love peace, but there are some leaders in the world who will use violence as a means to power.”

A few of us in the Skees family recently visited Hugh during his stint as museum host–a volunteer service he performs every Saturday, all day. We find him working on a pile of brochures about the DIPM, making a website correction by hand in pen on each one.

“I don’t do much of anything,” he chuckles. “Mostly I just sit here and read my magazine.” Hugh serves alongside Charlotte Paul, another volunteer (this is an all-volunteer 501(3)c nonprofit organization) working to raise $100,000 of the $120,000 needed for a capital campaign. The DIPM wants to secure the deed on the building and adapt it for handicap accessibility and energy efficiency. The first $30,000 toward the DIPM goal of expansion and inclusion of their physical space has come from  . . . Hugh. He and his wife Jasmine have gifted such a significant amount of time and funds to the DIPM that the museum has named their conference room after them.

On this winter Saturday, the museum feels warm and inviting. The second and third floors bear exhibits on wars of the world and realities of killing that can be tough to take in; yet from the hallway walls gaze portraits of Nobel peace prize winners: Martin Luther King, Jr., Mother Teresa, Elie Wiesel, The Dalai Lama, Jimmy Carter, Wangari Maathai, Muhummad Yunus, Ellen Johnson Sirleaf.

Our family visited once before, from all corners of the U.S., when Hugh and Jasmine celebrated their 50th wedding anniversary in 2006. Their youngest daughter, Sally Skees-Helly, collected funds and organized a surprise grant to the DIPM as an anniversary gift, and most of our clan of 30 members in three generations spent a memorable afternoon exploring the exhibits together, sharing in Hugh’s vision of a peaceful world. 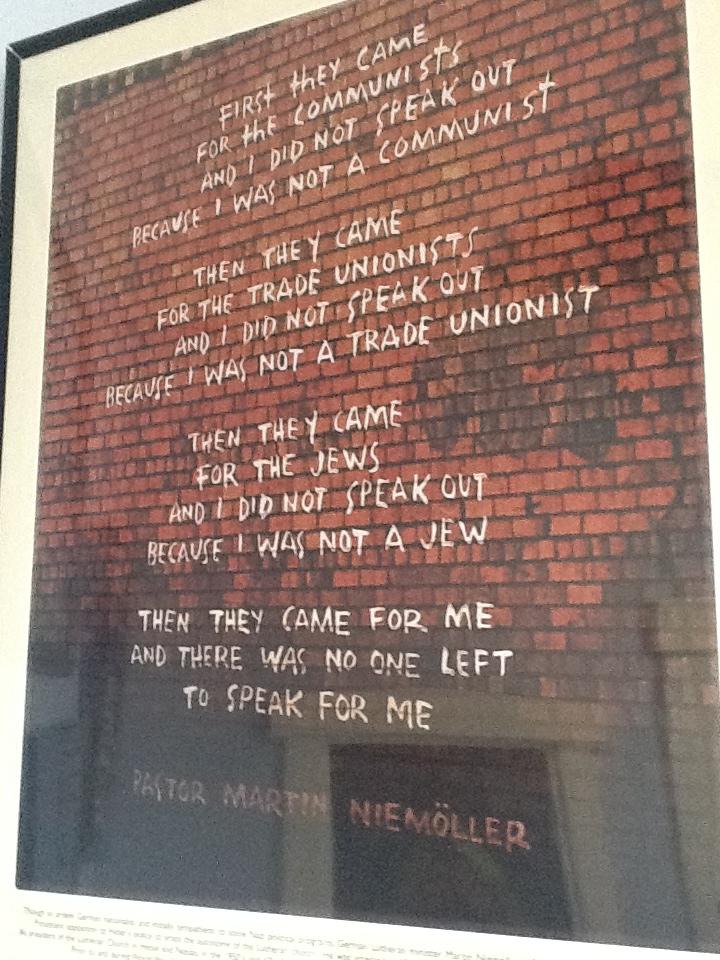 Now as we close out 2011 and celebrate the possibilities of 2012, we watch as a family of four, then a young couple, then another small group of tourists come shyly through the big front door of the museum. Hugh greets each one with a broad smile, and assures them that admission is free.

Board member Bashir Ahmed, president of the Islamic Center of Ohio, has just gotten off a plane from Pakistan and has come straight to the museum. We all talk about the unique function the center serves, in the local Dayton community and in the world. “I give the founders, Christine and Ralph Dull, a lot of credit,” Hugh notes. “It’s so unique. The museum is a public reminder that people desire peace, people love peace. It promotes peace in the community and in the world.”

And we kid this retiree that working at the DIPM keeps him out of trouble. “This is a cause I feel strongly about,” Hugh shrugs, “and it’s a nice place to hang out.”

The Dayton International Peace Museum invites you to visit their website and read about their current exhibits on memoirs of a Polish Holocaust survivor, spiritual traditions and peace, Sister Dorothy Stang’s work in the Amazon, Gandhi and global nonviolent solutions to conflict, Pete Seeger and music for social activism, and peace in the Middle East. Come visit in Dayton, get involved as a volunteer, or donate to the “Peace 240 Campaign” to extend education for peace. 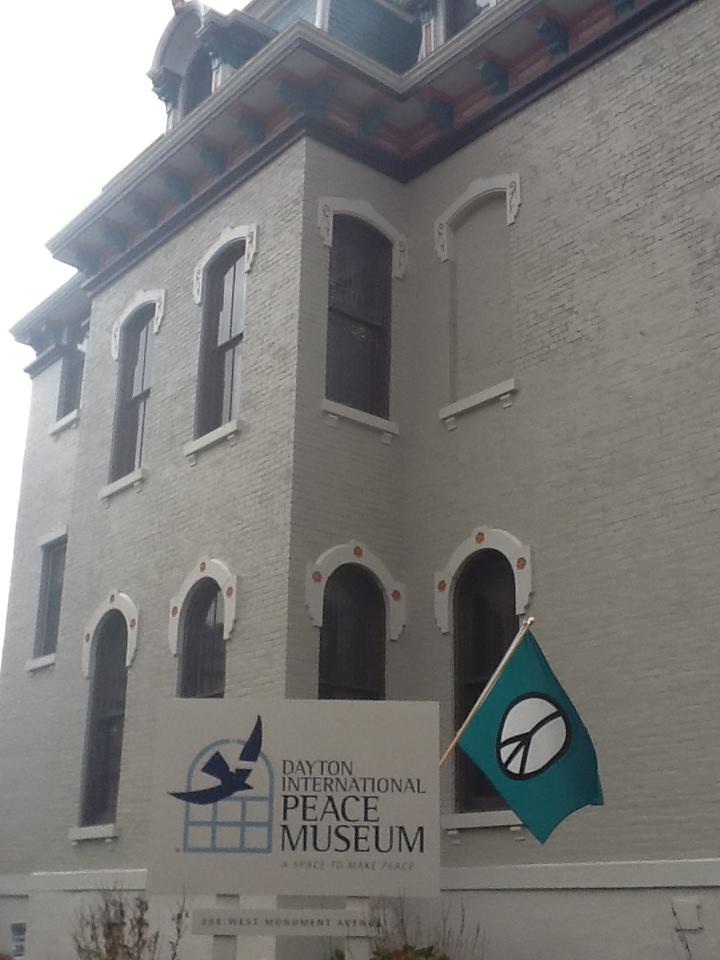 *Peace museums that used to exist in Chicago, IL and Seward, NE have closed; Envision Peace Museum in Philadelphia, PA has programs and a website but no building.