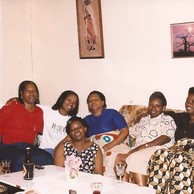 Sometimes, travel leads us to the most unexpected discovery of home.

Kigali, Rwanda: Traveling to a country vastly unlike one’s own can feel disconcerting, particularly if the schedule moves too fast to slow down, look about, absorb the surroundings. Having studied the history and culture of this land-locked country in central Africa, I traveled here with my class for a whirlwind sampling of government and NGO programs, human rights and media projects, agricultural and healthcare efforts, pre-colonial through post-genocide history, and youth education and enterprise initiatives.

We spent just one week on the ground, although a few of us arrived early to explore the capital city of Kigali (population: 1 million, in Africa’s most congested landmass with 12 million in a space smaller than Maryland) and visit a holistic-healthcare nonprofit called The Ihangane Project (story to come). By Tuesday evening, I was already wrung out on antibiotics, running 16-hour days from long bus rides to myriad meetings. I would scribble furiously into my small black notebook all the vital data being thrown at us from all directions, from market-based to donor-funded solutions, hoping to hear the content sometime later at a slower speed. Tuesday evening, our buses arrived 90 minutes late back to the elegant Serena Hotel, and I had five minutes to clean up and brush my teeth before my telephone rang.

However, time froze when I picked up the clanging receiver. “Hello?” I inquired in English. “Hello Suzanne!” a warm voice exclaimed.

“I am so happy to hear your voice. I’m coming down now!” I grabbed my gift bag and, energy renewed, zoomed out the door and down the hallway to the elevator.

Julie is the sister of my dear friend Marie Kagaju Laugharn, back in the Bay Area. Marie is an ex-pat Rwandan who’s worked in development her whole life—from UNDP and Stanford University, to TeachAIDS, Scotts Valley Rotary Club, Santa Cruz County Women’s Commission, Opportunity Collaboration, and The Ihangane Project—in Africa, Europe, and now the U.S. She was first in family to attend college, earned a master’s in English, and bought the house where her mom and Julie now live. Having grown up in a rural village, they lost several family members and their home—burned to the ground—in the 1994 genocide. Knowing Marie as I do, it didn’t surprise me that she simply gave her house to her widowed mother—or that she never told me so. 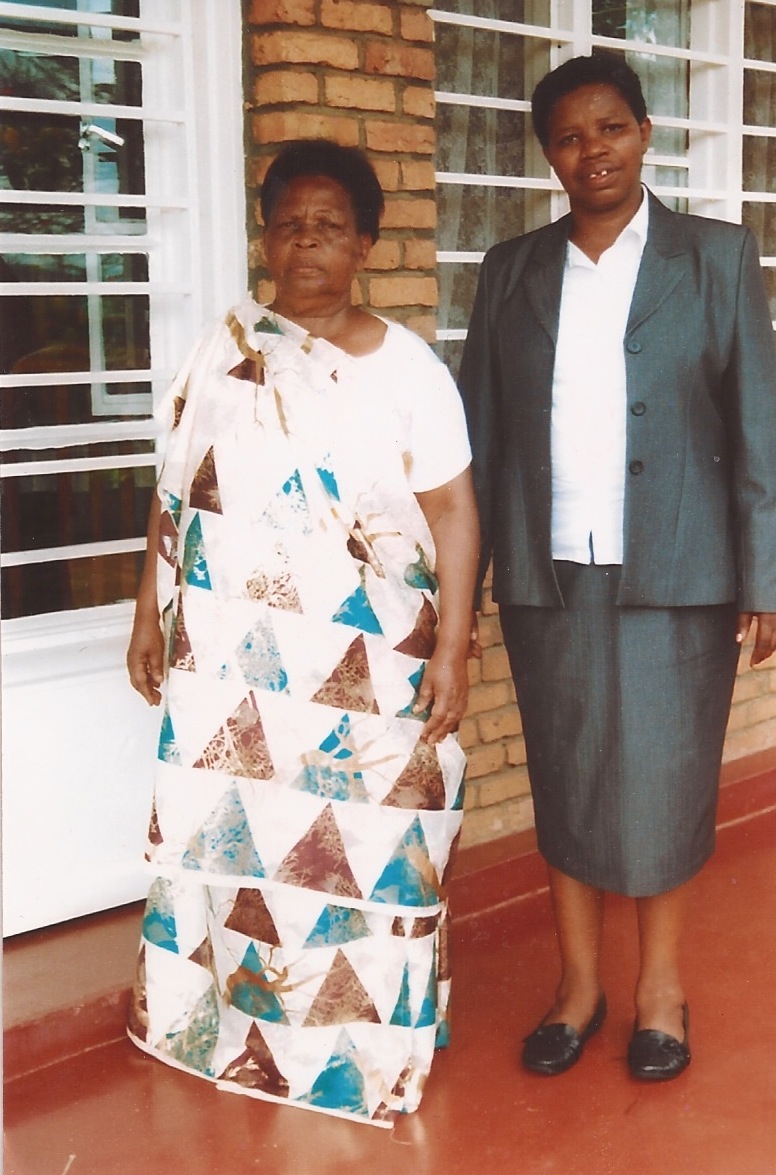 Mama Madeleine and Julie in front of their Kigali home.

Coasting through the cool evening air of Kigali, I sat back in Julie’s sedan and exhaled for the first time in Rwanda. I’d met Julie and their mom, as well as her sister Claudette and her family from Canada, at my home last summer when they all visited California. They’d come for tea and hours of conversation, Kinyarwanda and French laced with English, floating above my head and out the doors we’d flung open to the sea air. Mama Madeleine vividly remembered the view of the Pacific Ocean from our family home, and I would never forget that she herded us—even my eye-rolling teenager—into a circle to run a long prayer of blessing on us that ended in tears and hugs all around.

Marie and I had agreed when we first met that we would be sisters. There was something between us that just felt that way. And after our San Francisco family tea, it seemed imperative that I should return the visit when in Kigali. My class schedule allowed me just this one evening of free time, yet I had no idea how wonderful it would turn out to be.

When Julie had visited California, she’d barely spoken; but tonight, her English flowed fluently. Never married, Julie had stayed with her mom in a sweet synergy of co-care. Now 83, Madeleine was alert and upbeat and a great little hugger. When Julie and I pulled in to the family’s suburban house, a one-story yellow-brick ranch, we opened the front door to find Madeleine on her tan corded phone, Skype-calling with Marie. Three sisters living in the area had come over to greet me: Anne, Lucie, and Annonciata. They gathered around to hug me, welcome me, and pamper me.

When in Africa, you know you are an honored guest when your host pulls out the Fanta. I sipped an orange soda and chatted, and soon the dining table began to fill with grilled tilapia, barbequed chicken, fried potatoes, rice, stewed bananas, fresh peas and carrots, pickled vegetables and mayonnaise. Annonciata talked about her past work in elementary education and curriculum materials, and Lucie shyly described the little shop she runs with her adopted niece Fabiana, who joined us for our hen-party dinner. Fabiana is so petite and slender that she looks much younger than her 25 years. I asked if she wanted to attend college and told her about Akilah Institute, the junior college for women coordinating our tour this week.

Anne, who speaks flawless English, stopped midway between the sumptuous dinner and fruit-and-chocolates dessert to ask me point blank: “Don’t you wonder how I speak English so well?”

In a country where everyone over four grew up with Kinyarwanda as a first language and French second—only in 2008 did the government declare Rwanda’s official language as English—I did.

“Well, when my children grew up, I took myself back to college!” Anne laughed. She studied English and business, and worked her way from secretarial level into project management, within just a few years, for the Administration of Land Management. Particularly after the genocide, when one million residents were murdered and two million fled the country, her office has spent years settling border disputes about who owns what, upon their return. It was Anne who told me of Marie’s generosity in giving her home to her displaced family.

For just a few hours in Rwanda, I was not a student, but a woman, a sister. We sat around the table and talked, and laughed about anything that seemed silly, and a lot did. Being a jaded American, I was struck by their innocence, especially given the violence and hardships they’ve all endured, including death, poverty, heartbreak, and illness. Tonight there was no trace of sadness, and I sensed there was never self-pity. A deeply religious family, they praised God for life itself, for a cold soda and a good meal shared.

When Julie passed the rice and no one took any, we realized we were all women of a certain age trying not to let our hips expand beyond reason. When I jumped up to help wash dishes, they all exclaimed, “Don’t you dare! That’s what houseboys are for!” And sure enough, a young male employee emerged from the kitchen to clear the table. I joked that they should bring me a houseboy when next they visit California, and again we all collapsed into giggles of double-entendre.

The moon rose high in the sky, and we all began to stifle yawns and think of the workday morning ahead. I exchanged email addresses and began to gather my things. They were sending me home with tea and coffee, two major exports of the “thousand hills” of Rwanda, as well as gifts for Marie.

All of a sudden, Julie pulled us all into a circle and began to pray. I did not understand one word, but the cadence was lovely and loving. She continued for about ten minutes, and then snatched a songbook from the cabinet and, right arm waving in time, led the mama and sisters in a Christian canticle. When they got to “hallelujah,” I joined in at the top of my voice. All of my reservations about religion fell away, and I forgot for a moment how the Catholic church of my heritage betrayed hundreds of thousands of Rwandans just 18 years ago this month. All I saw was the joy of faith in front of me, and the sweetness of embracing what one is left with after the storm. 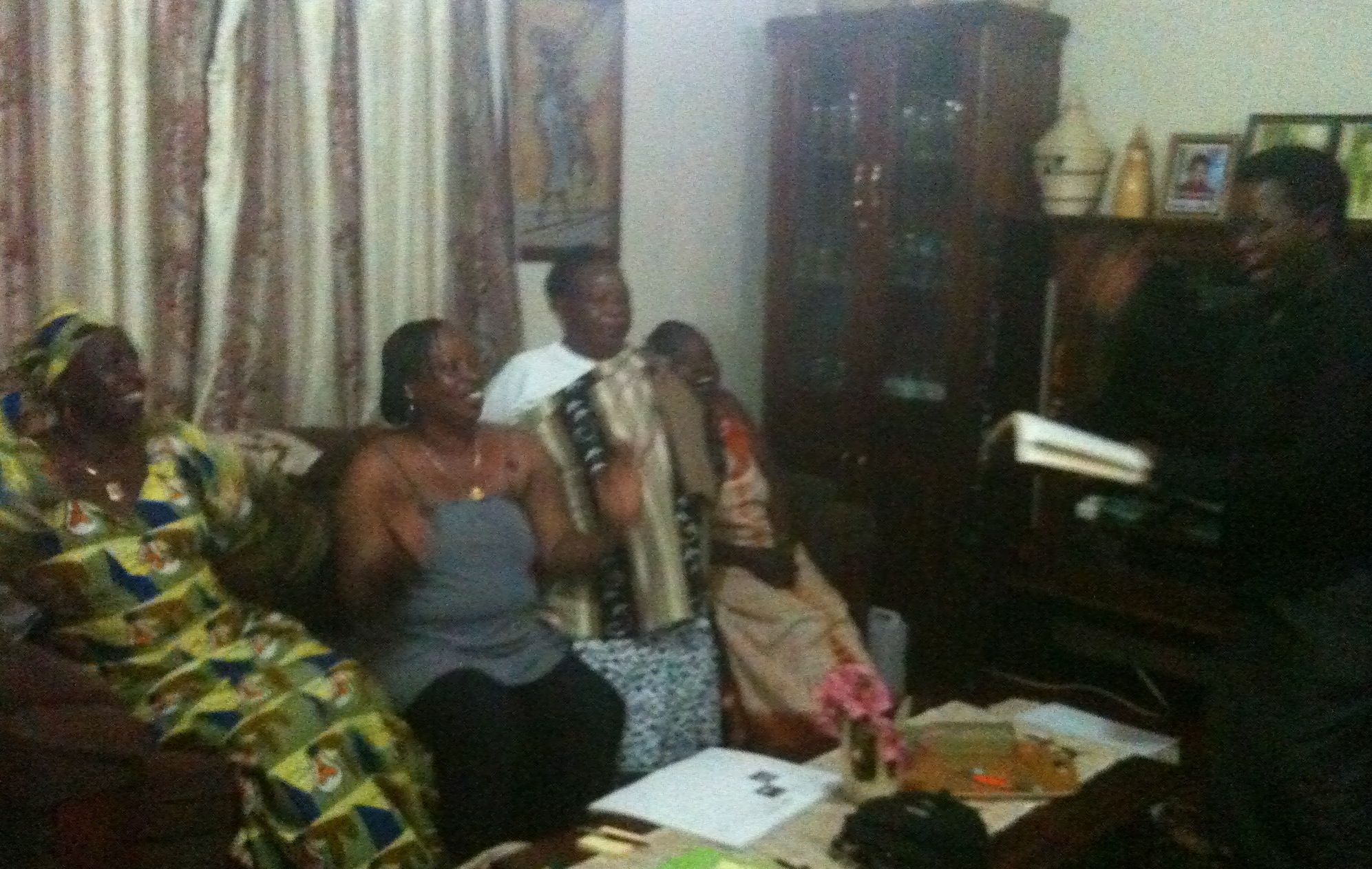 The sisters and mama bringing down the house in song, led by Julie (R).

Long past that evening, I still wonder why the Kagaju women welcomed me so heartily into their home. Yes, I was a friend of their daughter and sister, but Marie has thousands of friends all over the world—she’s just that sort of person—and I was clumsy and uninformed, stopping in for only a few hours, to take their food and hospitality and offer nothing in return. I suspect it has something to do with the generosity of Rwandan culture, as well as their deep rootedness in family.

I learned a lot that week about what’s working and what isn’t in social change, education and enterprise, economic development and government in this small country. Our American and European group came away knowing that we had far more in common with Rwandans—good and evil, passive and proactive—than we’d imagined. But what will remain the most vivid in my memory will be the night of no classes, when I got to be just another sister at the table of a million family dinners, in a home that felt more like home than anyplace I’ve been in years.

It brought me back to an appreciation of my own mother and sisters, whom I take for granted daily, while I rush around living my busy little life. It brought me back to an innocence of belief in the goodness that surrounds me, which the Kagajus call God. And the connection with this family is what will motivate us to support this country as it rebuilds itself after the crimes of colonization and genocide, into a thriving center of coffee and tea, hospitality and technology—in President Paul Kagame’s words, “the Singapore of central Africa.” 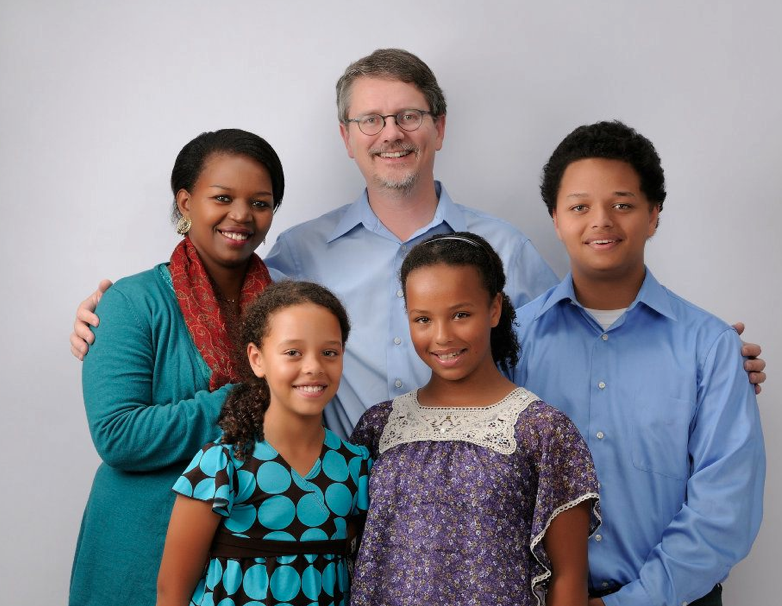 Marie in California with husband Peter and their three children.