Empowering Women: The Story No One Knows 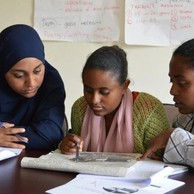 Whole communities change when women gain access to education and employment, and the resulting choices over family size, healthcare, and financial management. Behind the politics and statistics, there’s a story not yet told, of who and what it takes to get there.

Note: The particular links to the universal: As I spoke with the activists featured in this story, the United Nations celebrated their annual International Day of the Girl Child on October 11, 2013.

San Jose, CA: Dusk settles early on an autumn evening this month. It descends slowly in layers of orange and purple over tree-lined office parks in Silicon Valley, where tech stars never sleep and the rest of us dream of getting by. Inside Cisco Systems Building #10, a small group gathers to talk about their efforts, both here and abroad, to end poverty by connecting women with education, healthcare, and jobs; small-business ownership, activist journalism, and political office.

“California has the highest poverty rate in the country,” proclaims a woman in her twenties. “It takes three full-time minimum-wage jobs for a single parent of two children just to get by in this state.”

“1.4 billion people on this planet live in ultra poverty,” adds a man in his thirties. The group brings nonprofits and funders in a conversation hosted by Catalytic Women, a network of small- to high-net-worth changemakers working to “disrupt” philanthropy via crowdfunding, collaborating, and grassroots partnerships. “Studies have shown,” says Catalytic Women’s founder Melanie Hamburger, “that when you give women a chance they reinvest in education, family, and the community.”

“There is a stimulative and ripple effect that kicks in when women have greater access to jobs and the economic lives of our countries: Greater political stability. Fewer military conflicts. More food. More educational opportunity for children,” Clinton said. “By harnessing the economic potential of all women, we boost opportunity for all people.”

Maybe you’ve hear of exciting projects led by Sheryl WuDunn and Nicholas Kristof (Half the Sky), Nike (The Girl Effect), Oprah and Angelina and Melinda: organizations and women of world-renowned power are reaching a hand back to pull humankind forward through gender equality and opportunity.

What no one knows, though, is the story I got to hear from the back of the room in the Cisco cafeteria. As the sky grew thick and dark outside floor-to-ceiling windows and inside, fluorescent lights blared on five ordinary people who shared their extraordinary stories.

My family and I feel incredibly lucky to be the wind beneath the wings of 29 organizations working to create equal opportunity for all, in the U.S. and around the world. Join us by getting to know our world-changing partners at Skees Family Foundation. Whatever your gender, log onto Catalytic Women, join a local event or giving circle, and share your story. Let’s talk about what ordinary folks can do. And let’s take up more space and volume than the corner of a corporate cafeteria: Between us, we could have stories to fill a coliseum. LEARN more about our partners’ work to empower work here

DONATE directly to your choice of organizations working to equalize opportunity. Every person, every effort, counts.


← The Karimu Kids: Building Bridges of Wood and Culture: Part 4 of 4 Where in the World Is a College-Loan Bubble a Miracle?-Vittana Shows the Way, Part 1 of 4 →